Poem for a Byland


Ten wooden buoys ly'in on a road; in a liquid city, they reap what they sow.
Nine wooden buoys in the land of the fey; can't set their pots til the middle of May.
Eight wooden buoys carved from the tree; when it came to a price, they couldn't agree.
Seven wooden buoys rowed to the dance; two got drowned, the rest were in a trance.


Why did the wind blow em of course?
Did they hear the women wail til they were hoarse?
When did the young leave their fair shore?
Where did they go, do they hear the night waves roar?


Six wooden buoys look'in for their boat; lost their quota and the rope don't float.
Five wooden buoys - one was fat; got a job in Toronto as a bureaucrat.
Four wooden buoys on a train out west; came back home in their Sunday best.
Three wooden buoys, their sills were rotton; the rames picked clean, they scoured the bottom.


What will lift this pall over their place;
where the presence of absence cracked the code.
Did it have to happen - was it really a race?
Ten wooden buoys goin' down the road.

"It is easy to go down into hell;
Night and day, the gates of dark Death stand wide;
But to climb back again, to retrace one's steps to the upper air - there's the rub, the task."

"I took the train from Pittsburg to Steubenville, with a certain misgiving in my mind - I was going to visit again my Ohio river country, that I knew and loved in 1920 and 1921 - but would I find it changed, or I so changed that it would have lost it's charm for me? That neither happened fills me with great intoxicating  joy. A bitterly cold day - at Steubenville, I seek the hilly street where in 1921 I made a pencil study of some old houses - I find them practically unchanged after eleven years - perhaps a little better - After making another study I take a streetcar for E. Liverpool- The vast grim primitive country between Steuberville and Toronto is overwhelming - here is untouched virgin material - long low shanties and brick kilns huddling at the foot of vast grim bald - topped hills -


Arcadia
The desire for the Utopian landscape has long held a conscious and unconscious place in the western mind of the visual artist. Idyllic life, according to the French painter Nicolas Poussin, came with a big price in his 1638 oil on canvas located in the Louvre; a graphic reminder (in the form of a tomb inscription); Et in Arcadia Ergo.

Even in Arcadia I am there, the "I" suggesting Virgil's not so gentle reminder of those ever present gates beckoning both the idealist and realist alike. Death and the subsequent uncertainty of heaven or hell.

Yet, In Poussin's painting, a shepherd youth seemingly circumscribes what appears to be his own shadow on a tomb; a gentle evocation of man's reality through the representation of his image - symbolic of the youth's future death, but also the creation of art; Poussin artfully winking to his own stock and trade.

Burchfield's Journey
In nineteen thirty nine, Thomas Craven, American author and conservative art critic of modernism, mused that Charles Burchfield and other regionalists were the "leaders of the most exciting and important art movement existing in a troubled world."[2] Seven years later and with the tragedy of the second world war fresh in their minds, European museums interested in exhibiting American art were treated not to Burchfield and regionalism, but the urbane works of Rothko, Gorky, Pollock, and Motherwell. Much had changed and artists like Burchfield were left to consider their worth in the wake of an ever growing modernist ship - moving inexorably toward the elimination of the representational image. So, as Burchfield slipped under the radar screen of American modernism, Arcadia waited for him, patiently, symbolically and mystically, in the shadows of Gardenville, New York.

Early on, it was those shadows of the American small town he was most comfortable in. Local houses and the backyard grid of garden sunflowers captivated his interest. Later he would paint the after glow of small towns, street corners with Gothic houses, and graphic power poles, his composition disturbing and reorganising the patterns of our easy arm chair familiarity with the streetscape. Those houses and streets stood out with a working class melancholy, reflecting for Burchfield an ancient time which was once fluid and unclocked, echoing the spirit of their maker - later to be challenged by the hardships of American  industrialisation and modernism.


But for Burchfield, Arcadia was both  rural and the small town - not pastoral perfection as with Poussin, but American and weather laden. Weather and the change of seasons held little interest for most critics of the day. They did however for Burchfield. The advance or retreat of a season, it's growth or decay  meant an even stronger imprint would be cast on the exaggeration of the elements in his painting. But even back then the sounds of wind and rain permeated  his imagery - the harbinger of Arcadia's voice in  Burchfield's modus operandi - and for him the gateway to the seasons of the American spiritual makeup.


New York Times, Critic Holland Cotter considered Burchfield a chronic depressive; "a lamenter and yearner" for God and a way back to Eden. There may be some truth in this as Burchfield early on in his life rejected organised religion - however, the temptation to deliver a psychological analysis of an artist as complex as Burchfield is something of a red herring - a way of not confronting the profoundly sensorial aspects of his immersion in nature and the spell it cast over Burchfield and his work. Especially in a time where conflict raged over who would define American art. In turning back to nature Burchfield actually turned forward to Arcadia, replete with growth and decay, light and darkness, life and death.


Burchfield was a consummate practitioner of watercolour, his preferred medium. The use of graphic patterns around things like trees or flowers reflect his means of equating sounds in nature ( like that of insects of woodpeckers), with a form of calligraphic writing with the brush. As a result his images pulsate with the sounds of teaming life. In turn, suns, moons and stars radiate and move as though the image is not fixed to the paper. A Burchfield sky became a landscape in itself with stars and constellations configured with the scrutiny one would normally associate with land and the complexity of vegetation that embellished it. Everything in nature was alive with sound and light. For Burchfield, the sun had as much voice as a Cicada. The forms of clouds echoed a poetic song  brooding on an approaching storm or bracketing the appearance of the moon. His paintings spilled over with symbols, metaphor and celebration.


Sometimes the images would be enlarged through the addition of more watercolour paper spliced to the existing image.This made for a generally unusual size for watercolour imagery. A scale one would normally associate with oil painting or the larger museum works of today's photographers. 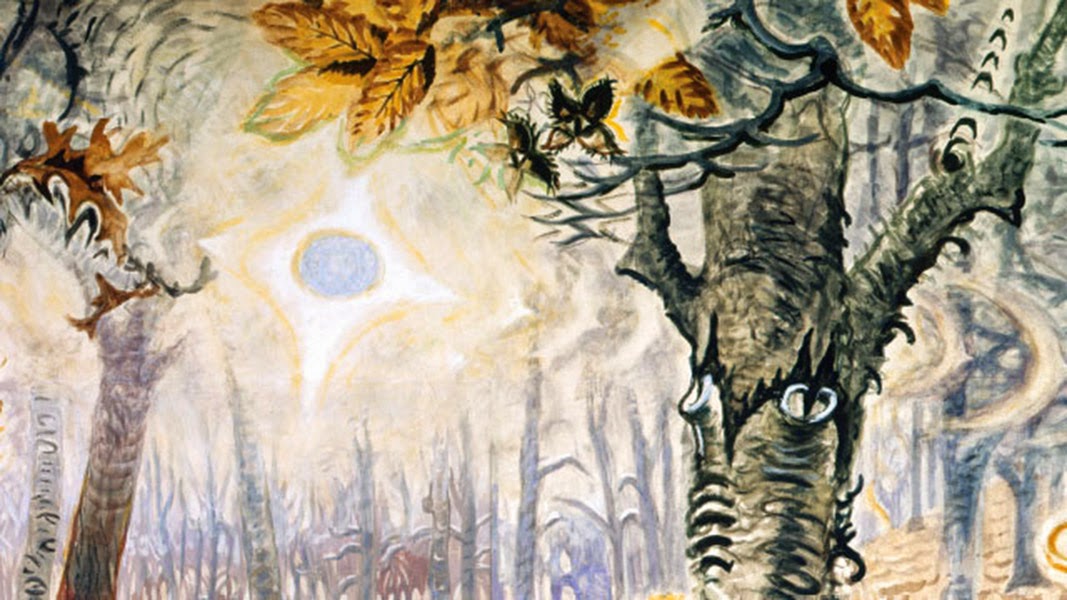 Dark Symbols
Burchfield's Arcadia was not without its dark side. With the conceptualisation of approximately two dozen cryptic symbols, Burchfield may have meant to represent the negative and repressive qualities of human nature. Man's fears and anxieties, were inserted into his paintings, yet  intensifying the dichotomy of doubt and belief which resonated throughout his own artistic life.


In 1921 Burchfield worked for a wallpaper company to pay the bills. His success was growing though, and he developed a reputation for small town, ashcan school like imagery, reflecting the sentiment of American industry characterising the country at the time.   However, with notoriety, the painter seemed to be slipping inexorably away from his chosen beginnings. Retrospectives have a way of changing the course of artists with unique careers. The 1944 Burchfield show at the Albright Knox brought a rebirth of sorts to the artist who longed to return to the place where he began. But this time even though he had changed, Arcadia continued to hold its charm for him. Burchfield eventually confronted organized religion, not with war but peace. The next twenty years chronicle his master works and immersion in the nature of the mystic senses.


Like Virgil who pointed to retracing one's steps to the upper air, Burchfield could be said to have certainly achieved this most difficult of tasks. Reflecting back on the Shepherd's encounter with the tomb in Poussin's painting of 1638, Burchfield's last notation at the bottom of his final painting - "a very dark pit" is a stinging reminder of his own journey through Arcadia. The painting Early Spring is anything but celebratory. A landscape in decay created by one of America's greatest Arcadians.