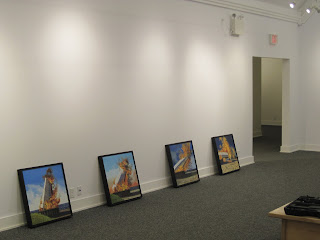 It's been very seldom that I've had the pleasure of showing work in Cape Breton, let alone in a space like this with such amazing aesthetics. The gallery at Inverness County Cultural Centre has a cathedral like design to it that is worth the effort for any artist. It also is quite malleable and makes an installation a pure pleasure.

It was great to be an assistant to the chief technician (John) who made the task so easy. The guy's a pro! Thanks to Director Kaye Robertson for making today so much fun and also so easy.  Here are a few shots taken while working on the installation. Can't wait to see it fully lit and detailed. I'll document the show after the opening on August 30th. Looking forward to it. 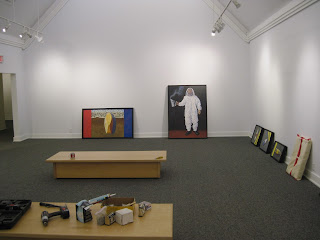 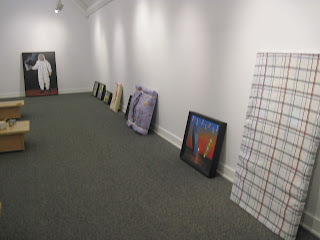 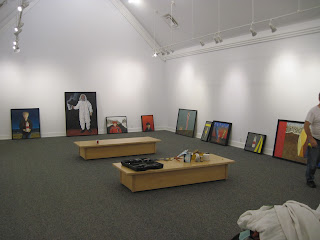 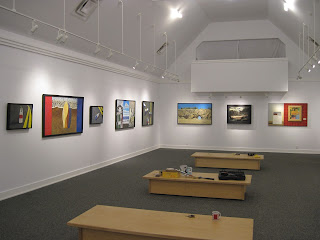 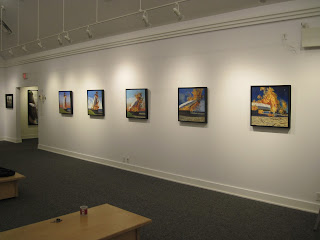 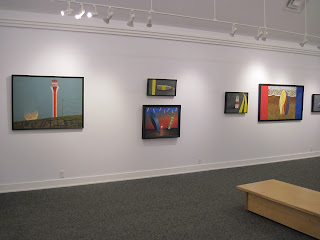 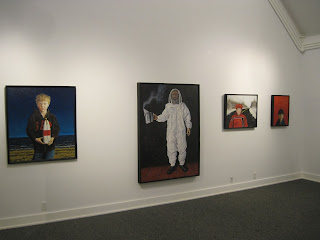 Posted by Steven Rhude at 14:44 No comments:

Five People on a Beach 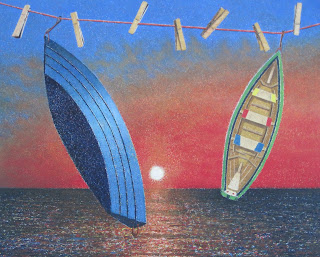 Five people were on a beach experiencing the ocean and sky.

The first person looked at the sea, but he did not hear the tern crying in the sun.

The second person knelt down and felt the sand, but did not taste the salt air on her tongue.

The third person wore shoes and liked to collect beach stones, but did not feel the beach sand between his toes.

The fourth person had a blackberry and took pictures of the sun set, but she did not smell the eel grass along the shore.

The fifth person heard a ballad being sung in the distance, but did not see the missing boats.

Posted by Steven Rhude at 15:56 No comments:

"You can't know who you are until you know where you are."
- Wendell Barry

Steven Rhude: Finding Nova Scotia. The exhibition explores Rhude’s development as an painter after his move to Fox Island, (near Canso) Nova Scotia in 1990.

Rhude’s adopted province of Nova Scotia has inspired a number of unusual paintings by the artist over the last twenty three years. Featuring a hybrid space of objects and rural context, Rhude has consistently been creating engaging imagery with under currents of humor and irony, couched in the significance of place in contemporary society. Rhude is one of a small breed of social realists still practicing this form of expression in Nova Scotia.

Situated within his regional landscape, think of falling boats, lobster buoys on roads, or burning lighthouses, and you will touch some of the vital components of Rhude’s art that have contributed to his contemporary vision of Nova Scotia.


Twenty paintings in all, the show focuses on Rhude’s progress as a social realist painter with in the context of rural depopulation and coastal communities. He doesn’t portray rural life compromised by big box stores and urbanization, but points to the icons of east coast communities easily commercialized, abandoned, or taken for granted. Objects with more than just utilitarian characteristics.


There are also two early nudes from 1990 showing Rhude’s European influence. Rhude studied in Florence, Italy as a recipient of an Elizabeth Greenshields scholarship in 1982 with OCAD's off campus program. Also included are some portraits, including a large one of a Beekeeper suited up in white and holding a smoker.


Then following through to the more colourful works he is known for today. Exhibited for the first time, is a series of five oil  paintings titled “The Burning”, an expressionist depiction of a lighthouse on fire and collapsing to the ground.


Accompanying the show is a full colour book on the work of Steven Rhude titled: A Place Called Away - Living and Painting in Nova Scotia. 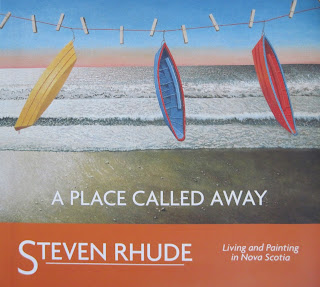 For further information on the show or artist, please contact: Caitlin at:  thirdmeadow@invernessarts.ca

or contact the artist directly: stevenrhude@ns.sympatico.ca
Posted by Steven Rhude at 11:59 No comments:


The Romantics were prompted to seek exotic subjects and to travel to far off places. They failed to realize that, though the transcendental must involve the strange and unfamiliar, not everything strange or unfamiliar is transcendental. - Mark Rothko

He mused on finding a place.

Posted by Steven Rhude at 06:47 No comments: