Lost in the Harbour


Lost in the Harbour

http://www.youtube.com/watch?v=ohNfC6-GFzU
Posted by Steven Rhude at 13:56 No comments:

Night After a Hurricane


They took the ferry over to PEI for a show.

It was December and a winter storm set in.

It was a strange opening (that's what they call an event where people gather to look at art, but really don't).
It felt more like a closing.
It was a strange mixture of people.

They were on a winter island renowned for tourists, with no tourists around.

He recalled a nun at the opening who openly enjoyed the Hurricane painting. She said it did that "you know what" to her.

Then she blushed. So did he.

It was the night when he met Joseph Sherman - the poet, and editor of the defunct Arts Atlantic magazine.

He knew he was a tireless promoter of maritime art and artists.
It was also a grumpy night for Joe.
And it was also uncomfortable for all present when Joe openly lambasted representational art, old conservative Realism, and the desire to convey a concept or idea with a pictorial objective. The sermon seemed endless. Thank god there was wine.
When Joe was finished, he replied "we now have a new academy, that of  Social justice progressivism, one that embellishes identity and  probably through art, alienates more people than it convinces."

It was the only time he met Joe Sherman.
It was a long time ago.
Joe passes away in 2006.

He recalled mentioning the nun's words to his wife when they were back in Fox Island, after a hurricane.
She said "Joe Sherman should have listened to the nun."
He blushed again. 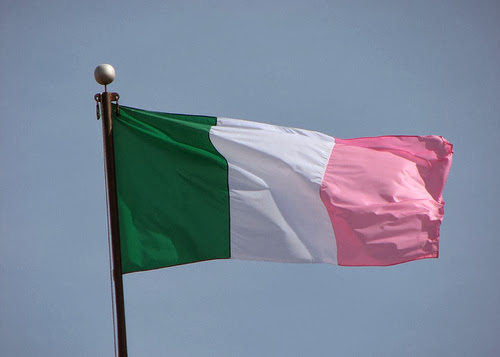 "Fishermen who were members of the society may well have flown the SOS (Star of the Sea) colours off their boats and houses and since they were the bulk of the population, this would have lent great weight to any symbol they employed en masse. Fishermen were, after all, the backbone of Newfoundland,"the men whose labour and sweat the country owes everything it possesses." What represented them could have very easily been seen as representing the country"


Last summer, I spent some time traveling around the Avalon Peninsula, more or less charting my way through as many of the coastal communities as I could. It was hard to not notice the Pink, White and Green flag, often seen flying beside the Provincial flag of Newfoundland and Labrador. The Provincial flag was designed by Christopher Pratt and legislated back in 1980 while Brian Peckford's government was in power. However, the unofficial flag with it's pop art colours, seems to be widely flown today owing to reasons pertaining to identity as well as novelty.

The pink colour strikes me as having a post modern appeal that seems to be unique when it comes to flags. This is just an assertion I make as an outsider looking in. However, you will not find a pink like it in any country's flag until you go to Brazil. Even then it's at a sub-national level with the state of Espirito Santo. The appeal of the colours have led to some diverse connections according to James K. Hiller of Memorial University of Newfoundland:

"The PWG tricolour is widely flown these days, appears on the masthead of The Independent newspaper and is available on car plates, t-shirts, hats, swimsuits and so on – sometimes with the byline "Republic of Newfoundland".[2] Even the province’s liquor commission has jumped onto the trend, with a new rum displaying the PWG on the label. The phenomenon has been called "Newf-chic"

It's well documented by historians that Newfoundland was never a "Republic", but that hasn't stoped the use of the byline. While crossing over to Newfoundland on the ferry, I saw several items in the tourist shop with "Republic of Newfoundland" stamped on them. Mired in myth, and that it represents independence to some, seems to have as much to do with the troubled post Confederation history of Newfoundland.

The colours of the flag never officially appeared in public until around 1870. That is when the Star of the Sea Association (SOS), a mutual benefit society founded in 1871 by the Catholic Church, eventually simplified its flag and started to use it in ceremonies and processions. It is considered by historians like Carolyn Lambert  that the colours of the SOS are therefore the most likely origin of the Pink,White, and Green flag seen today.

Even though today, pink may be synonymous with the pop art movement, and also the highly mediated world of "chic", the Pink, White, and Green flag will probably never have any support to displace  the current flag. Back in 2005 a poll was taken that showed only twenty five percent of Newfoundlanders would consider changing to the PWG flag. Cited as reasons were the financial costs of the change, and ironically that"pink" was not an appropriate colour for a flag.

Flags are complex and powerful symbols capable of stirring up nationalistic emotions in all of us.  However, perhaps the words of James K. Hiller would be apt to consider in light of the issue:

"From the beginning of Newfoundland nationalism to the present, certain themes persist. There is a faith in the rich potential of natural resources, albeit a faith that is severely dented these days by the fisheries crisis, problems in the forest sector, and the difficulty in regulating multinational corporations. There is also the faith in the sterling virtues of Newfoundlanders and Labradorians, even as they leave for Alberta and points west via ferries and planes, as well as pride in the province’s history and culture. Finally there is friction with an imperial centre (once London, now Ottawa) and a tendency to look for external scapegoats. It was always a defensive nationalism as well quick to take offense, and resentful of actual and perceived slights. Gerry Bannister is right to point out a major difference between the nationalism of Bond’s day, and that of the present. Bond’s was an optimistic vision, while today’s Newfoundland nationalism is haunted by the past and by dreams about an imagined world that has been lost - a world encapsulated in widely popular images of idealized outports complete with mummers and of an old St. John’s where poles and wires have miraculously disappeared and every house is newly painted. It is a nationalism that debates endlessly whether the right decision was taken in 1948 and hopes that a better deal with Canada might just happen. This is a remote possibility, perhaps, in which case the role of culture, history, and heritage, and the Pink, White, and Green become all the more important in cementing a sense of purpose, place and identity." [4]

Posted by Steven Rhude at 11:14 No comments:


Perfection - ghost rames on pistons - the dykeland was a two hundred and thirty five year old track all her own; Acadian style.

Hard to isolate her when in full stride. Well maybe Eadweard Muybridge could have with stop action photography, but not the human eye.

It's like the way a bullet is judged by sound.
Not velocity - she shot by you before you could turn to defend yourself.

Not that you could, even if you tried - you felt her ribs graze your hip. Saw her face cut through the fog.

Or you thought you did...

Particles of moisture scurrying to collect themselves.
Serves them right for not paying attention to the speed of soul.
Moisture left behind in a wake of necessity.

An escapee - ears up and saved by the bell.

Last seen at Rayham/Taunton in Massachussets - AKA - Mohican Dimple; a gambler's tribal ritual, she turned tricks seventy nine times before being put out to pasture.

Track rats in sear-sucker suits probably cashed in. Guys who chewed on unlit cigars, spit before betting, and then went to church on Sunday.
Meat - the circuit - meat - the circuit... and so it goes for the Greyhound.

Must have been like death row and waiting for a pardon while wheelbarrow loads headed for the bone yard.

A connection made with a bee keeper - of all people.
Who once cared for a Whippet -  and knew the turf.
And gave her the coat, knowing the north.

Her head down and an elegant gait in obeisance to space.
An object of humility mentally recharging, physically adroit with every sinew;

Posted by Steven Rhude at 04:44 No comments: