What really happened in Marshalltown - part 2

"Eventually, helpfully, at the intercession of Benoit Comeau, Lita was released from her cell. In her decades of isolation she had forgotten how to speak. She was unable to explain or to describe the years that she had spent. She had gone into the poorhouse a young spinster and come out old and mute. She would spend the years until her death in 1983 in a Yarmouth home for the elderly. She played cards. She recovered some use of speech. Her story would be included in a 1999 CBC radio series with Ron Foley MacDonald and Medard Comeau.
The story of Maud Lewis, had she been incarcerated, could have been similar to that of Lita Saulnier. The story of Lita Saulnier was not unique. A poorhouse in Halifax would contribute an account of a woman kept in an underground cage. Several Nova Scotia Keepers were imprisoned. Two, at least, including one in Marshalltown, Digby County, were hung. That Everett Lewis could be employed as Night Watchman, and be given the keys to the womens’ wards, would make many shudder. Other watchmen and keepers would be discretely replaced. And still others were too well placed, in the politics of their county, to be touched.
Throughout the 1940's and into the 1960's, Maud Lewis was able to visit with the Thomases and the Haydens in the Poor Farm. The wards, total of four, were the Poor Men's, the Poor Women's, the Insane Men's, and the Insane Women's. The Strong Room was in the basement and generally housed only men. The Keeper’s Quarters were closed to the inmates, but Poor Women could come to the door. The toilets and baths of the Insane wards were strictly regulated. A Poor Man or a Poor Woman could bathe without supervision. An Insane Man or Woman could not. Poor Women could smoke in a supervised hour. Insane Women, at times, could not: It depended upon the severity of their affliction. As in all cases of restraint and incarceration, “smokes” became currency.
How strictly these regulations were upheld might vary among the Keepers. All inmates, however, were locked up at night. In Marshalltown the Insane Women were not shackled every night, but only if restive. Maud preferred to use the Poor Women’s: A bath could be taken, in the Poor Women’s, without supervision." - Lance Woolaver

About five months after my last trip to Marshalltown, we're driving back to the tract of land that has inhabited our creativity and studio practice for a while now. As the rain diminishes, Poor Farm mortality and the indifference of history gnaws at us as we pass the odd road side abandoned house, decaying with the rich contrast of abundant new vegetation engulfing their wooden husks. 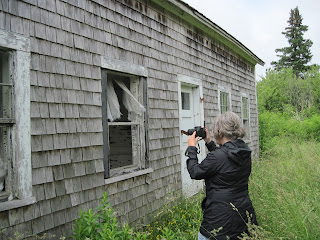 It's summer now and my companion is Laura Kenney, a rug hooker who has equally shared this decent into the uncomfortable history of  a metaphysical house next door to the late folk painter Maud Lewis, and her murdered husband Everett. Our work done, the results of our exhibit "Whose Maud?" hang back on the walls of Acadia University Art Gallery in Wolfville, "researching, repositioning, and reconsidering" as Curator Dr. Laurie Dalton points out while visitors consider Whose Maud?

The construction of a new highway is evident to us as a clear cut corridor reveals its route behind the house that Maud once lived and painted in. It skirts closely the location where the Poor Farm stood, with two graveyards of now identified (and many still unidentified) inmates. The old saying "you can bury a body, but not the truth" is apt for this place. A memorial will eventually be constructed and sanctification will become a reality. Countless cars and trucks will drive by continuously with a digital map as a guide; the new world order will continue as the wraiths of inmates - those dead and unborn, vaporise back into the bogs and streams that provide nourishment for this painfully beautiful part of Digby County.


Yet if a place speaks to us through memory, then the Maud Lewis and Poor Farm narrative that has been uncovered by writers, poverty activists, a curator, painters and rug hookers, may still struggle to find coherence with Maud's Folk Art rise to apotheosis. I suppose a story like this will always contain multiple truths and personalities. Contrary to suggestion, "Whose Maud?" is not a swipe at the Art Gallery of Nova Scotia. Our research may be somewhat at odds with the cheerful branding of Maud Lewis by the vision of an art museum far away in Halifax, but our compulsion to complete the equation had to reach beyond merchandise, gift shop sales, and a well established brand.

Perhaps art gallery board rooms are not the place for uncomfortable tales of poverty and abuse, or the ostensible ownership of an artist's legacy. It's hard not to admit these are difficult issues to deal with. Making poverty popular is a very unpopular exercise. Poking around the logic of museum branding is usually met with quiet indifference by an administrative establishment. These days, developing a museum “brand” is a complicated task. The visual identity of an arts institution has to attract visitors and donors, volunteers and fundraisers, and it also has to say something about the curatorial vision of a museum both past and into the future.

However, the gulf between the two Mauds is now evident to many, something that is important and can't be avoided. Questions have been tendered, and answers are now being proffered. In re framing Maud with the poor farm connections, the role of the artist is evident as it should be in a cultural exhumation such as this.

Laura and I make a stop at the steel cage, a minimalist memorial to a house that was both a studio and prison for Maud. In a last homage, we install some of Laura's hooked rugs. No one stops to inquire what we're doing. Its hard to compare the experience of visiting the cage with what would have once been a visit to two anti modernists living in a real house with a wood stove and bread baking.


The cage window signifies to us that Maud did after all have a room with a view, depending on the viewer. This window has indeed acquired a pedigree of its own, while at the same time relating to the contemporary context of the #metoo movement. Questions swirl around the cage and I have Lita Saulnier on my mind. 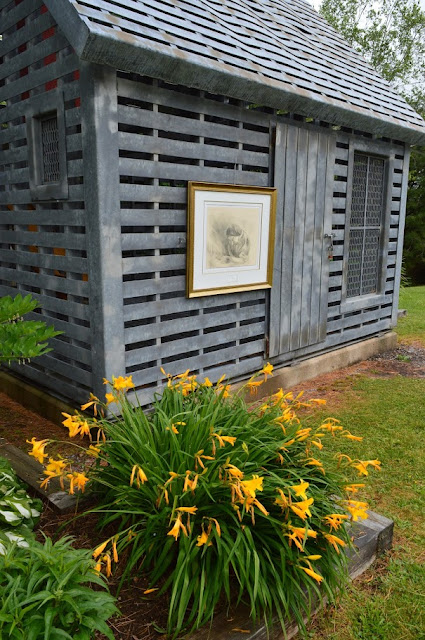 Some achievements can be neatly summerized on a balance sheet - and some can't.  A word to the wise: ordinary benchmarks can't be used to measure artistry. Maud Lewis slipped a little joy into our pockets and then quietly slipped away. Today, loud eighteen wheelers clatter by as we video and photograph the work for the record. And so it goes.