"Like the prostitute, the cat was discrete but not respectable, neither bourgeois nor working class but rather a bohemian figure flaunted by artists and intellectuals who enjoyed the ‘independent, almost heartless’ character of the cat." -Jody Berland


"Olympia reclines coolly on her chaise lounge, surveying the viewer (her next client) with a look as clinical as the exchange that's about to take place. Though boasting a fine art-historical pedigree, based as it is on Titian’s Venus of Urbino, the painting caused outrage for rendering its model not as an idealised, ancient goddess but as an unashamedly contemporary whore from Montmartre. Inspired by the Realism of Courbet, as well as Baudelaire’s call for artists to paint “modern life”, Manet said matter-of-factly: “I just paint what I see. Could anything be plainer?”

This, though, was surely a little disingenuous. He must have known he’d inflame matters by substituting Titian's faithful dog, asleep at Venus’s feet, for a livewire black cat – with its tail raised, back arched and eyes firmly on us. Black cats, of course, had satanic overtones, dating back to their association with witchcraft in medieval Christianity (in 1233, Pope Gregory IX even issued an edict for their extermination, along with that of their female owners). And then there’s the fact that the word “cat” in French slang means female genitalia – much as a word for cat in English slang means the same."

Essentially, with so many people in the province leaving – people from all walks of life - as a result of poor economic conditions, even poorer political judgement, jobs at any cost to the landscape, and greener pastures abroad, I used this door as an opportunity to explore and remind myself what it was that brought me here in the first place. If ever there was a time to ask “What about Nova Scotia?” this is it.


Recall:
He recalled her saying he did not seem to have a lot of childhood memories. Perhaps this was true or perhaps it wasn't; yet like a broken movie reel, the film had been spliced together but with a few pieces missing. What he did remember was in stark contrast to his ocean home now, like the pattern of cookie cutter capitalism and its perfect suburban grid. Intercom systems. Elevators with floor buttons scorched by cigarettes. The beige walls of an apartment without a cross breeze. Loud voices and arguments from the next flat. Parquet floors and cheap carpeting. Odors emanating from the hallway garbage chute. Heavy doors leading to an underground parking lot.

Later he recalled her eyes, a strange green and and brown combination. Her hair long and black. An artist herself. A couple of romantics they were. He remembered her saying ... "what about Nova Scotia?" 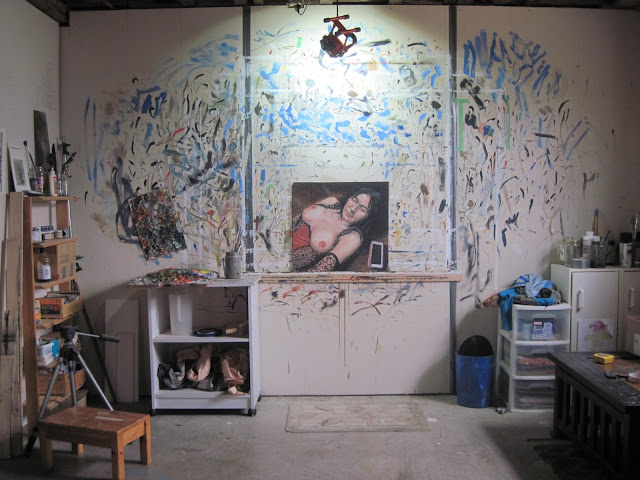 From Olympus, home of the gods, and on through to modernism, the portrayal of the female nude within the context of an intimate subject matter continues its historic journey, but does it still carry with it a grand narrative capable of undermining our skepticism? Probably not. Skepticism is the common thread running through most of the waning post modern exercise. The portrayal of the nude human figure (man or woman) now has as it's hallmark an artificiality about it, an affectation that implies that nudity has actually become a form of clothing in itself. We seem more interested in common marketing schemes like the "wardrobe malfunction" or the "naked selfie", rather than the narrative once posited to the Eurocentric tradition couched in the form of  Sacred and Profane Love. We forget that Olympia was once ours to behold.

Back in 1865 the modern name Olympia was code for a Parisian prostitute. Within a single painting, this code was broken and used to challenge the hypocrisy of the day, and with a calculating expression, that code eventually stared down the male gaze and reflected it back on to the viewer. Manet's model for Olympia was Victorine Meurent, (a painter in her own right) who for years was ignored by Manet's biographers and cast off as a drunken prostitute:  "Writing in the 1940s, Manet's biographer, Adolphe Tabarant, acknowledged that Meurent exhibited at the Salon, but remained as judgmental of her private life as his 19th-century predecessors. He wrote that by the age of 40 she was a wreck, that she had been selling her drawings to her "companions of the night", and had fallen into drunkenness and depravity, before disappearing." [1] Even though it took years to overhaul the marginalization and reputation of the model for Olympia, the painting itself quickly got down to work replacing an antiquated regime in art.

Olympia was to become emblematic of our desire to reshape history, yet now she is a passive cog in a rudderless system that preys on information and data under the banner of a personalized state. So what happened to her and her ability to forge a more realistic history, as hard as it may be?

Germaine Greer: "History does not tell of a single courtesan, however fêted in her heyday, who died rich. Pregnancy was a constant risk, as was disease. If a courtesan bore a female child, and the child was pretty, she would be introduced to the life as soon as her mother grew too old to attract the best-heeled clientele, and her mother would act as her doorkeeper. Behind the glimmering images of the great courtesans lay the reality of the hundreds of thousands of women who would sell sexual favours if they could, wenches who would do the deed for a dish of coals or a mutton chop. In rural Africa and rural South America and God knows where else besides, today you will find women who sit outside their huts, hoping that a passing lorry-driver might stop and go inside with them, leaving in exchange enough money to buy their children something decent to eat." [2]

Well, today Manet's Olympia continues to conjure up a variety of complexities in contemporary painting, but much has changed in the interim and we need not go to see her anymore and be "touched" by her in the flesh - since she now comes to us virtually. This is in itself a fracturing of Olympia's reality. With out a doubt, the painting can be self contained in a tiny I-phone screen , and sent out to millions via instagram or facebook. She no longer needs to be suspended high up on a salon wall, out of reach from the throngs of protesters she once used, even seduced into participating  in a revolutionary exercise - one that eventually evolved into the dematerialization of the art object, as the old Academy walls came crashing down, and the traditional bricks were discarded. Today they have been replaced by a new virtual post modern brick called the app, replete with its own virtual Olympian gods and technocratic largess we refer to as the internet. The "johns" became "internet users", a metric that has a multiplicity of subsets. Johns could be "visitors, registered users, active users, monthly or even daily users." And as they say: where the rubber meets the road, there is the "paying user."

So even though Manet did not know how far and wide his Olympia would travel to break down the barriers of the moral hypocrisy of the bourgeoisie; like wise he could not have imagined how Olympia would in turn be seduced and used by a moral hypocrisy of technology - one that claims to be a provider of freedom and accessibility - where the state remains democratic and protects our rights and freedoms. But in reality technology cares little for her independence, not just as a woman, but as an individual and a human. As Bill Gates advises: "If you think your teacher is tough, wait until you get a boss." Gates ought to know, for in many respects he is our boss, where the state has forfeited our democracy over to the tech giants for management services for everything from health care, to protecting us from the bogyman.

Today, if the narrative is relevant, Olympia may still be portrayed as a woman, but she envelopes a lot more of our post modern human characteristics than we may be aware of, or even wish to contemplate, regardless of our gender. Her gaze is no longer firmly fixed on us the viewer, independent and self defining, capable of making us feel we are the naked one. Her servant no longer brings the proffered flowers from a client.  Instead, she now receives a text message - and is now emblematic of a different kind of revolution - a personalised state. A brave new world where we are informed of the struggle to strike a balance between safeguarding sensitive personal data, and being able to collect and use such data to individualise everything in our lives from napkins to education.

Furthermore, she is fixated, even dependent on her phone as she navigates her way through both her physical and psychic world, unable to step freely without the ubiquitous electronic aid as her guide. She may still trade in the oldest living commodity - sex, but more likely today's Olympia now trades in free digital services in exchange for our personal data. She has come to symbolise something else entirely, and her nakedness is no longer related to the history of the nude and its spiritual affinity, whether sacred or profane; or that which has roots touching Classicism and beyond. She has undergone a conversion without a religion, she is methodology without goals, she is empowerment without individuality. She has once again been romanticised through a screen. She is quick and connects to the past, but without the aid of teachers - now she accesses direction from the likes of coaches or facilitators.

Olympia once brought us back to the cruel realities of life and fueled our disdain for hypocrisy. She broke the tradition of the flaneur in half. Now, she is a product of personalised learning and she is equipped and self-directed. She has become her own content provider, yet she is without content.