Maud's Neighbours and the house of the Unsanctified


“If we know in what way society is unbalanced, we must do what we can to add weight to the lighter scale ... we must have formed a conception of equilibrium and be ever ready to change sides like justice, 'that fugitive from the camp of conquerors'.” - Simone Weil, Gravity and Grace


"So please state your name and where you come from... and let us know what inspires you about Nova Scotia." - Workshop Facilitator

I'll confess it caught me off guard. Ten years ago it wouldn't have, since a general appreciation of our province's natural beauty, or traditions would have sufficed as an answer. Yet this is 2018, and my focus had been changing to something quite the opposite of conventional inspiration.

The unsanctified, at least in the sense of those that were without moral or social sanction, like Maud and Everett Lewis were, are now part of a sanctified Folk Art tradition that emerged in tandem with the Poor Farm era and Modernism. However, the narrative inherent with Poor Farms was oddly left out of the equation as Nova Scotians preferred to identify with the designation of Folk Art crafted and defined by academics and scholars. A designation for the cultural shop window that appealed to the nostalgic perspective of a simple and bucolic life without the specter of Poor Farms, inmates, and abuse to taint it.

So mine, and Laura Kenney's work of late, is inspired by what? Perhaps it is a return to set the record straight... or at least a little bit straighter than it currently is. Our sources are a continued collaboration with each other through correspondence, Maud Lewis' biographer Lance Woolaver, archival Victorian images of Poor Farms, Poor Houses, the harmless insane, and inmate accounts, as well as the Marshalltown Alms House - Voices of Hope group.  Perhaps comprised it is also a means to add weight to the lighter scale as Simone Weil concluded, to provide moral and social sanction to what was omitted the first time around through the  offering of art.

It’s hard to believe that Maud Dowley, growing up in relative secure circumstances in the seaport of Yarmouth could have imagined that one day she would live with, and marry a former poor house inmate named Everett Lewis, and have as her next door neighbours the respective and imposing Alms House and its inmates. Yet located on, and set back from the highway, on an isolated stretch of road in the tiny community of Marshalltown, this facility would hold sway over the future of many individuals, their families, both identified and unidentified - and ironically, such was to be Maud’s destiny as well.

The romantic conclusion of Maud and Everett as depicted in the recent film 'Maudie', deviates from a modernist tale of abuse and captivity, both psychological and physical, along with probable malnutrition. It was hardly a thirty year love story. Maud's real circumstances in her tiny house next to the poor farm, her life and art really can't be fully comprehended without contextualizing it within the larger picture of this facility and it's wider influence over the modernization of rural Nova Scotia's marginalization and socializing of the poor.

To think that this chapter is merely a foot note in Nova Scotia's history is to overlook the contemporary social issues ranging from the modern welfare state, to that of captivity, in all it's various social guises. The Poor Farm is a modern metaphorical tale whereby our collective concerns about being, knowing, substance, cause, identity, time, and space, have been housed, but not necessarily cared for or nurtured. It is a metaphysical prison that haunts us to this day.


This is another installment into the exploration of Maud, Marshalltown, and the legacy of Poor Farms in Nova Scotia. We look forward to the upcoming book to be launched in May by Brenda Thompson titled: A Wholesome Horror; Poor Houses in Nova Scotia. 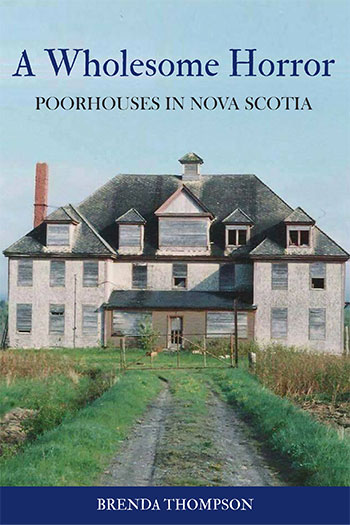